Aboriginal childhood overweight and obesity: the need for Aboriginal designed and led initiatives

Abstract:
Childhood obesity poses an urgent and serious public health challenge in Australia. Aboriginal children are more profoundly affected than non-Aboriginal children, with the gap in weight status between the two groups widening, indicating an increased risk of metabolic disorders earlier in life. Obesity is the second biggest contributor (16%) to the gap in health status between Aboriginal and non-Aboriginal people. The bulk of this gap is attributable to people living in non-remote settings who make up 81% of the total Aboriginal population in Australia. The complex interplay of socio-environmental factors that contribute to obesity are well known and include prolonged financial stress associated with food insecurity, urbanisation, substandard and overcrowded housing, and lack of adequate access to health services. In addition, Aboriginal people, specifically, contend with the loss of traditional lands, and poor dietary behaviours due to the transition from traditional to Western diets as a result of colonisation.  This is especially the case for Aboriginal children. Most Australian states and territories have a suite of programs targeting obesity in childhood through healthy eating and active living strategies but with the exception of a few programs, the reach and effectiveness among Aboriginal children is either not known or has not been adequately assessed. Where programs have assessed Aboriginal participation, completion rates have generally been lower compared with the general population. The problem cannot be addressed without proper Aboriginal governance and leadership, and collaborative program development for Aboriginal-specific obesity interventions. Meaningful engagement and empowering Aboriginal communities to have control over programs that affect their health and wellbeing are more likely to result in positive health outcomes. Importantly, appropriate funding and support is essential to simultaneously facilitate the building of an Aboriginal health workforce to develop, coordinate, deliver and evaluate programs.

Objectives: This paper reviews available evidence on programs and policies for obesity prevention and treatment for Aboriginal children and provides recommendations for improved outcomes.

Importance of study: Childhood obesity is a serious and growing public health concern in Australia. Around one in four children aged 5–17 years is currently affected by overweight or obesity. There are very few national policies and guidelines for obesity prevention and treatment for Australian children.

Study type: A review of evidence on programs and policies for obesity prevention and treatment for Aboriginal children.

Conclusion:​​​​​​​ Urgent action is needed to tackle the childhood obesity epidemic for Aboriginal children. Strengthsbased, whole-of-community approaches underpinned by self-determination, that address multiple risk factors simultaneously are likely to be most effective at reducing obesity in Aboriginal children. Evaluation and dissemination of fndings need to be prioritised in program design, along with appropriate funding and support to facilitate the building of an Aboriginal health workforce to develop, coordinate, deliver and evaluate programs. 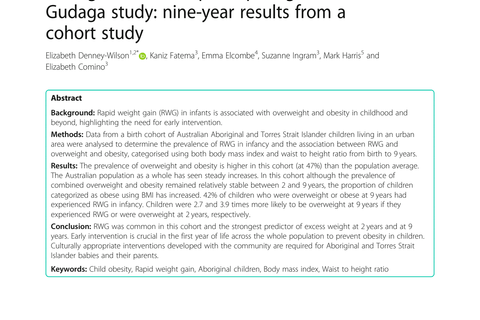 Overweight and obesity in childhood

The cost of inaction on Rheumatic Heart Disease

Submission to the Royal Commission into Victoria's mental health system 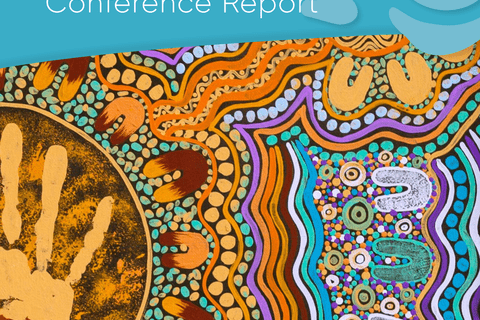