The myth of markets in school education

This report argues that neither creating more competition among schools nor giving them more autonomy without support to improve learning are the vital solutions that will lift the performance of Australian students.

Neither creating more competition among schools nor giving them more autonomy without support to improve learning are the vital solutions that will lift the performance of Australian students.

The myth of markets in school education shows that at least 40 to 60 per cent of schools face no or very limited competition, and there is very little government can do about it.

Giving school leaders autonomy to run their schools well is a good idea, but it has little impact on performance when governments do not implement it as part of a larger plan to improve teaching and learning.

The report is the first analysis of a 20-year policy in some Australian school systems to give schools more autonomy and to try to increase competition among them. These systems have led the world and influenced many countries but the evidence of an increase in student performance through market-based and pro-autonomy policies is not there.

One problem is that not enough schools have local competitors that have the capacity to take on new students, are good performers, and are affordable. Even when parents have good information about differences between schools, the good ones don’t grow and bad ones don’t shrink.

And the link between school autonomy and high performance is weak. Victoria, which led the world in increasing autonomy, has not performed above New South Wales, which was centralised until recently.

The world’s best systems have varying levels of autonomy but they all articulate the best way to teach and learn, then make sure they have the best teachers to carry it out.

Autonomy and competition are often linked in government policy because autonomy can allow schools to differentiate themselves and thereby attract parents from competing schools. The myth of markets shows that neither competition nor an excessive focus on autonomy is the best way to improve Australian schools.

The Tomorrow’s Schools Taskforce report (Part 2 of 4): an opportunity missed

The Tomorrow’s Schools Taskforce report (Part 1 of 4): the lack of debate

Tomorrow's schools: the reform of education administration in New Zealand 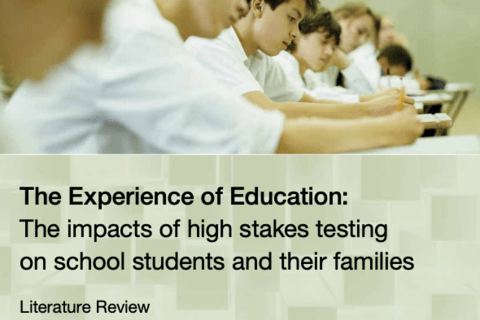 The experience of education: the impacts of high stakes testing on school students and their families

Accountability and the public purposes of education

Teachers' intentions to use national literacy and numeracy assessment data

Putting evidence to work - a school’s guide to implementation