This paper discusses new legislation being considered in New South Wales, aimed at enabling prosecutions in cases where an injury to a child could only have been inflicted by one of two or more persons who were at home with the child, but where there is not enough evidence to prove which specific person was responsible.

Cases involving non-accidental death or serious injury of children can lead to prosecutions for offences such as murder, manslaughter, or assault. A difficulty arises in pursuing criminal proceedings in cases where the injury to the child could only have been inflicted by one of two or more persons who were at home with the child, but there is not enough evidence to prove which person was responsible. This difficulty in identifying the perpetrator may exist either because none of the relevant persons offers an explanation that is consistent with the child’s injury; or because each of the persons insists that the other person was responsible for the child’s injury.

In October 2013, Deputy Coroner MacMahon recommended that the NSW Attorney-General consider introducing a new offence in NSW to deal with these types of cases. He referred to an offence that had been enacted in the United Kingdom in 2004. Certain persons can be found guilty of this offence if they caused the death or serious injury of a child or if they failed to take reasonable steps to protect the child from a significant risk of this occurring. The maximum penalty is 14 years imprisonment in the case of death; and 5 years for serious injury. On 16 July 2014, it was reported that the NSW Attorney-General, Brad Hazzard, was investigating the Deputy Coroner’s recommendation.

This e-brief begins with the Deputy Coroner’s findings before examining the extent of the problem in NSW. Next, it discusses the reforms in the United Kingdom, and it reviews a similar offence that was enacted in South Australia in 2005. Note that these offences are not limited to the types of cases where the perpetrator cannot be identified; more generally, they make certain classes of person criminally liable for failing to take reasonable steps to protect a child from a significant risk of death or serious injury. The final sections of this paper refer to similar “failure to protect” offences that exist in other Australian States and New Zealand (there is no such offence in NSW). 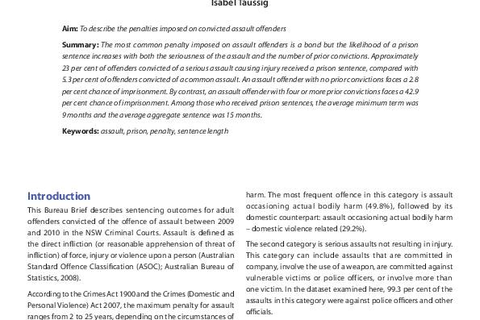 Walking the walk: next steps against family violence

Firearm homicide in New Zealand: Victims, perpetrators and their weapons 1992-94

How many repeat family violence perpetrators were there in Victoria over the past 10 years?

Do we need a specific domestic violence offence?