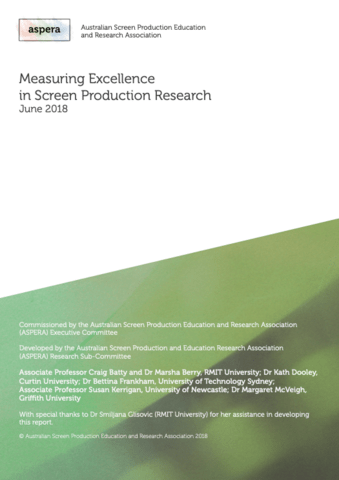 This document describes how the Australian Screen Production Education and Research Association (ASPERA) recognises, and therefore measures, research quality in screen production. The aim is to provide a set of guidelines and principles that can assist those who undertake and evaluate creative practice research in screen production to determine various levels of ‘excellence’. While advisory, not prescriptive, the document acknowledges that universities are increasingly focussed on ‘quality’ research, and that the discipline of screen production can benefit from a set of shared understandings about what this quality might look like.

While this document has been created with an awareness of the Excellence in Research for Australia (ERA) guidelines, it provides an independent view of how excellence in screen production research is understood and reviewed by peers in the discipline. It is important to note, therefore, that the project was driven by the ASPERA community and was developed in consultation with the ASPERA community.

It is also important to note that references to a screen work in this document are explicitly referring to those works that are clearly operating as a research output. Using creative practice as a method to generate knowledge about process, for example, does not necessarily result in a screen work that is a research output. The screen work must contain, embody or perform research findings in order to qualify as a research output. It must be doing or offering something new in its own right, which may be based on research that informs the nature of work (content, form, style, etc.), or may be the result of an iterative process of reflection in which reflective insights shape the nature of the work. Making a screen work and then reflecting on the making of it – without then changing the film on the basis of that reflection – does not (usually) qualify the film as a research output. The film (creative work) must contribute new ideas and/or practices to provide evidence as an outcome of research.

Between 2016 and 2017, the ASPERA Research Sub-Committee worked on a project that provided an overview of the current working environments of screen production practitioner-researchers in Australian universities, with a focus on how their creative works are/are not being valued and counted as research outputs. The project was conducted through analysis of national research reports and guidelines (e.g., Excellence in Research for Australia, The Watt Review), and interviews conducted with staff working either directly in the screen production research discipline, or in broader research reporting, evaluation and mentoring roles within universities. The report, Screen Production Research Reporting: An ASPERA Scoping Project, concluded that while some institutions had well developed frameworks and tools for assisting in the translation of creative practice to creative practice research, broadly there is still much work that can be championed by those in the discipline. This included better internal systems and means of support; stronger and more transparent internal mechanisms for reporting and valuing screen production research; and peak bodies such as ASPERA providing communal policies, frameworks and mentoring

Report of the review of research policy and funding arrangements https://apo.org.au/node/194636