As the National Broadband Network arrives in its first release sites across Australia, it brings high expectations of the world leading investment of $40 billion. It also carries heavy political baggage. If the Australian government wants to show quickly the benefits of the NBN to a very large part of the Australian population, it should connect it to every one of the nation’s nearly 1500 public libraries as a priority.

Here are six reasons why:

1. Public libraries are by far the most heavily used community agencies in Australia – more than half the population are public library members, who make over 130 million visits a year to local public libraries.

2. Public libraries are the only places in communities that provide open and free access to the internet, and increasingly wifi, for everyone – stop by your local library and you’re likely to see every terminal in use and many accessing the library’s wifi.

3. Public libraries are about learning – they play a critical role in the delivery of educational services and lifelong learning for all in Australia, including immigrants and refugees. They provide homework support for students, support for home-schooled students and their parents, research help with legal, health and job-related needs, access to a very large range of informational databases, as well classes and one-to-one programs to help seniors and others capitalise on the new technologies. All these services utilise the Internet – every aspect of a public library’s educational mission would be transformed by unlimited access to high capacity and very fast broadband.

4. Public libraries typically have substantial IT infrastructure and expertise – in physical plant and hardware, networking and software licences – to make immediate use of the great improvements, which the NBN promises to bring to the online experiences of all Australians.

5. Public libraries are among the most trusted and safest of community destinations, the most heavily used and valued partnerships of state and local governments, and are the most heavily visited parts of council websites.

6. Public libraries – from substantial international and Australian research - represent a tremendous economic value with an outstanding return on investment (ROI) of between $4 and $8 for every dollar invested in them. Priority access to the fibre optic based NBN would amplify this ROI and provide an early demonstration of the return on investment of the NBN itself.

Yet the nation’s senior politicians and bureaucrats still seem unaware of the high-quality research, from Victoria and elsewhere, which confirms the great value communities place on local public libraries, and the Australian public library system as a whole. Do they know, for example, that the local library is typically the number one after-school destination for young people, and that many thousands of school and tertiary students regularly spend their time in their public library studying?

If the Gillard Government wants to demonstrate and publicise the “education revolution” that NBN underpins, it would do well to give priority to connecting the emerging NBN to the nation’s largest, most pervasive, and most accessible community learning and education asset – its public library system.

NBN: a guide for consumers 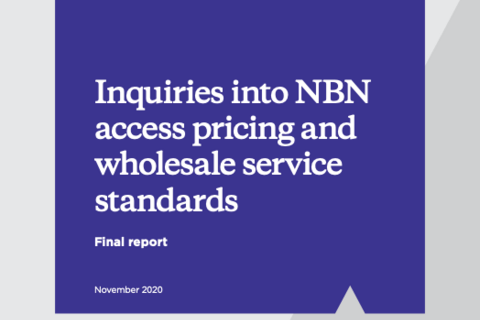 Telstra’s proposal to vary the migration plan to facilitate the rollout of fibre to the curb for the NBN: discussion paper