Chaired by Glen Boreham, the report sets out the committee's vision for fundamental change to the regulatory framework of Australia's digital economy, and identifies key areas for reform.

The Convergence Review is an independent review established by the Australian Government to examine the policy and regulatory frameworks that apply to the converged media and communications landscape in Australia.

The Convergence Review Committee was chaired by Glen Boreham with Malcolm Long and Louise McElvogue as committee members. The committee handed its final report to government on 30 March 2012.

Australia’s media landscape is changing rapidly. Today Australians have access to a greater range of communications and media services than ever before. Developments in technology and increasing broadband speeds have led to the emergence of innovative services not previously imagined. It is now possible to access traditional communications and broadcasting services in new ways, such as radio and television delivered over the internet. Users are increasingly at the centre of content service delivery. They are creating their own content and uploading it to social media platforms. They are controlling what content they want to view and when they want to view it, for example, through podcasts of popular radio programs and catch-up television services provided by free-to-air networks.

Despite these dramatic changes, Australia’s policy and regulatory framework for content services is still focused on the traditional structures of the 1990s—broadcasting and telecommunications. The distinction between these categories has become increasingly blurred and these regulatory frameworks have outlived their original purpose. These frameworks now run the risk of inhibiting the evolution of communications and media services. Convergence presents significant opportunities but also potential threats for traditional media, creating a need to transform both business and delivery models to keep up with changes in user behaviour.

Australia’s creative industries are well positioned to seize the opportunities offered by this new environment, and to ensure the development of our digital economy. Australian industry can expand our traditional screen businesses and develop excellence in emerging areas like smartphone and tablet apps. These industries can flourish in a converged environment that opens up new trade opportunities and cultural interactions with the rest of the world, where global distribution is virtually free. A new policy and regulatory framework is needed to support these outcomes.

The Convergence Review Committee was established in early 2011 to examine the operation of media and communications regulation in Australia and assess its effectiveness in achieving appropriate policy objectives for the convergent era. The terms of reference for the Review covered a broad range of issues, including media ownership laws, media content standards, the ongoing production and distribution of Australian and local content, and the allocation of radiocommunications spectrum.

Throughout 2011 the Review conducted a comprehensive consultation process to inform its findings and provide all Australians with the chance to have their say. During this process, the Review held public forums in metropolitan and regional locations across Australia, met with industry representatives, and analysed more than 340 detailed submissions and over 28 000 comments. The Review was also asked to take into account the findings of the report of the recent Independent Inquiry into the Media and Media Regulation in its deliberations.

1 In addition, it has also taken into account the recommendations of the Australian Law Reform Commission’s review of the National Classification Scheme.

2. The Convergence Review acknowledges the considerable work undertaken by these two concurrent reviews.

The editorial values of the ABC 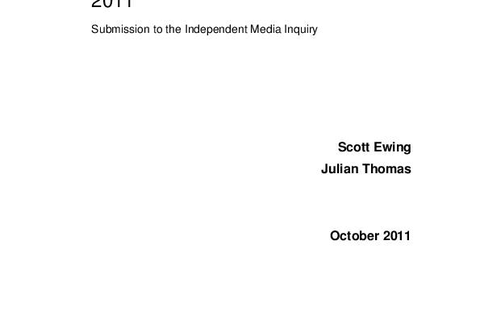 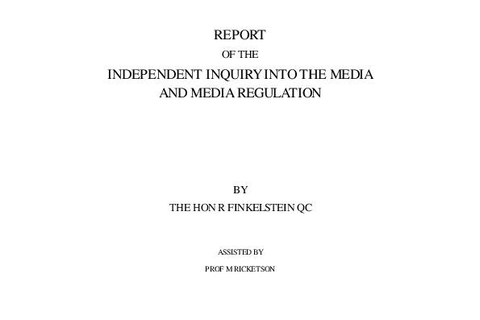 Report of the independent inquiry into the media and media regulation

A data picture of Australia's arts and entertainment sector 2010