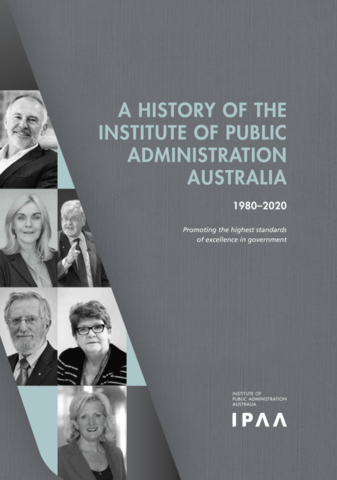 A history of the Institute of Public Administration Australia, 1980–2020

The strength of IPAA, since the very first regional group was formed in South Australia in 1927, has been its members: those working in government, those focused on the study of public administration, and those with a strong interest in good government.

Over the past 40 years IPAA has strived to support, challenge and inspire those working in the Australian public sector and promote the highest standards of excellence in government. Nationally IPAA has produced a journal of public administration since 1937, hosted a national conference every year since 1958, and since 1959 held an annual oration to provide a link between the memory of Sir Robert Garran GCMG — the first Australian Commonwealth public servant — and the subject of public administration.

This book of IPAA’s 40-year history reminds us of the wonderful spirit of service that defines the qualities of those working in public administration. Woven into this history are reproductions of ten Garran Orations delivered by some of Australia’s most eminent leaders, including three Prime Ministers, two leading public servants, three academics, a chief justice, a lawyer and four Aboriginal Australians.

Changes in the Australian Public Service 1975-2003

2030 and beyond: getting the work of government done

Independent review of the APS: priorities for change