Vocational education programs in schools, called VET in Schools (VETiS), were established with the specific aim of enabling students to undertake both nationally accredited vocational education and training (VET) programs (including part-time apprenticeships and traineeships) alongside programs that enable students to complete their secondary school certificates. VETiS programs lead to accredited VET qualifications.

The effectiveness of such programs is an important policy issue: although we are able to consider the longer-term profiles and trends of the VETiS program and qualifications, as well as the characteristics of the student cohort, what happens to the students after they complete the program and how it supports them in their employment or further studies are of additional interest. To date, there has been little information about the longer-term outcomes of students who have undertaken a VETiS program.

This report seeks to provide insights in two key areas by examining:

The uptake of VETiS programs over the last two decades has generally trended upwards, while the diversity of the programs in which students are engaged has broadened. Historically, VETiS students have been mostly engaged in certificate I and II qualifications; however, during the last few years we have seen an increase in certificate III qualifications, suggesting that VETiS is focusing on offering students more specific skills and skills of a higher level than previously.

A key factor in enabling the investigation of the further destinations of VET in Schools students was the construction of a new linked dataset. This was made by linking data from the 2006 national VET in Schools Collection, held by the National Centre for Vocational Education Research (NCVER), to data from 2011 Census of Population and Housing, held by the Australian Bureau of Statistics (ABS). The approach employed during the assembly of the linked dataset was based on deterministic linkage, whereby exact matches on responses for variables common to both datasets are linked. Successful matches were made for over 50% of the in-scope VETiS records, resulting in a substantial sample of students for the analysis.

While there have been previous studies which focused on identifying post-school employment and training for VETiS students and the personal development benefits accruing from participation (Misko & Slack 2004; Polesel, Helme, Davies, Teese, Nicholas & Vickers, 2004; Polesel, Teese, Lamb, Helme, Nicholas & Clark 2005; Black, Polidano & Tabasso 2011; ABS 2014), many of these studies have been constrained by the use of datasets of small numbers of VETiS students.

This large, linked dataset provided the opportunity to expand the number of data segmentations more finely than had previously been possible. This meant that we were able to examine the relationship between what students did in their VETiS courses and their post-VETiS employment and further studies. The combination dataset provided the platform for a comprehensive investigation of the actual differences in the employment, income, occupational and further training outcomes of different groups. It also enabled a matching of VETiS training to occupational destinations or further studies in similar fields and the opportunity to demonstrate the relevance of VETiS programs to occupations and further training for participants.

Expenditure on education and training in Australia 2017: update and analysis 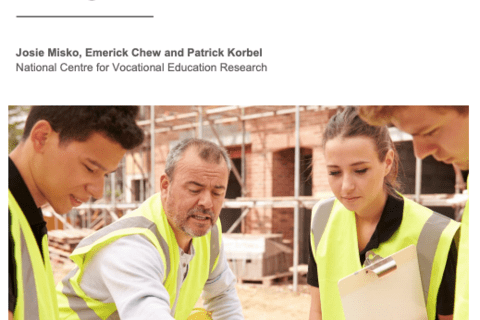